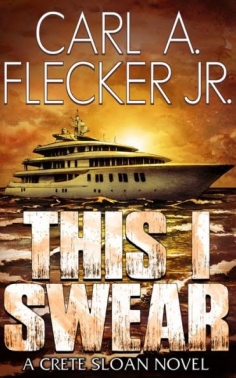 Crete Sloan, a rambunctious, hard-nosed tough guy, banged around life’s experiences before absconding to a remote island in the Bahamian Atlantic. First, as an enforcer for the Pittsburgh mob through high school and into his early twenties; then shot and left for dead by a close friend; a career change to the Pittsburgh cops, where he couldn’t do the discipline; then a private eye; and now a mercenary for the good guys.

Arlo Taylor is a British billionaire working out of London whose wife and two grown daughters are slaughtered aboard his yacht, the Skyliner, by Somali pirates. He hires Sloan to deliver justice.

Sloan’s search for the murderous pirates takes him from his island in the Bahamas to London, the Netherlands, France, and Africa. Along the way, he grapples with Taylor’s bodyguard, Sir Humphrey Bellingham, who wants Sloan off the case, and finds an ally in Captain Ellis Gordon, the commander of the Lemonnier naval base in Djibouti. Gordon warns Sloan that, should he pursue the case into Somalia, he stands no chance of returning alive.

He pursues justice for Arlo Taylor and lands finally in Somalia without a clue as to who the pirates are, what they look like, or where to find them.

A third-world failed state, decrepit lives, and piracy wait for Sloan in the Horn of Africa, where he meets the undaunted killers head-on.